On February 23, 2014, I attended a one-day workshop on ‘Language Testing and Assessment’ conducted by NELTA in association with the American Embassy at Kathmandu University, School of Education. The workshop was facilitated by Dr. Stephen J. Stoynoff from Minnesota State University Mankato USA, one of the key note speakers for the 19th International Conference for NELTA. 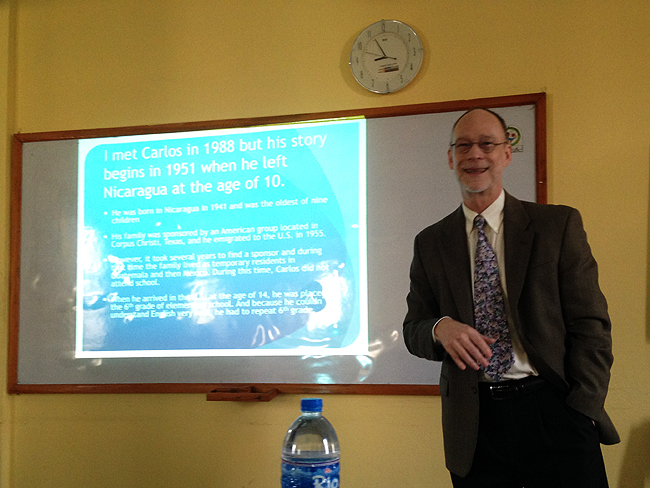 It was a very lively session by Dr. Stoynoff as he presented on how learners who learn English as the second or third language struggle in learning the language in the classroom.  He shared an example of his own friend, Mr. Carlos who had immigrated to America from Nicaragua in 1950s. He belonged to a Spanish speaking community and was already 14 when he joined a school in Texas, US. It was difficult for him to learn and adjust in the classroom with his peers who were much younger by age and he did not know English either. As a result, he could not succeed in his sixth grade and he had to repeat the same grade. As English was not his first language, it was obviously difficult for him to understand what the teachers taught in English medium that followed “sink-or-swim” model.

Dr. Stoynoff asked all the trainees to find out the factors that influenced language development and reasons for Carlos’s failure in grade six. The discussion ended with findings of the factors like home environment, societal environment and individual factors of language learners influence the language development.  A learner learns language if the educational level of the family is higher. The families which give priority to learn different languages helps a child to values towards education is also important for the development in a learner. It was amazing to find that Carlos earned a PhD later, though he had tough time in school in the early years of migration. The turning point in his life was at his school where a teacher appreciated his work in Spanish. Those inspiring words from the teacher guided him to choose Spanish for his further education and he earned a PhD in the same area. Now he is regarded one of the important experts in the field of Second Language Learning and Teaching.

It can be inferred from the story of Carlos that a teacher can inspire students to pursue their career in proper field of education and the motivating environment of the family also contributes in effective learning of languages. The interaction of the factors like home environment, societal environment and individual factors of age, proficiency of the first language, attitudes towards the second language and access to the Second Language and culture affects the rate of second language development of the learners. The first session ended with one open topic to debate on the pros and cons of teaching other languages than first language at early age of learning.

The second session of the workshop focused on the current trends in the field of Language Testing and Assessment. Assessment is a process based activity to ensure that a learner is developing his/her learning that continues throughout the daily classroom activities. The trainees were divided in groups to make a student profile having some questions to check the background of students in academics performance and to design the learning environment on the bases of it to expect possible development in the pursuit of the course.

Dr. Stoynoff shared the current practices of Language Testing and Assessment in the USA and some other countries. The trainees were asked to make comparisons between the classroom tests and the standard tests (high stakes tests). The discussion gave us idea about the types of testing in classrooms and beyond classrooms in terms of their procedure of conduction. 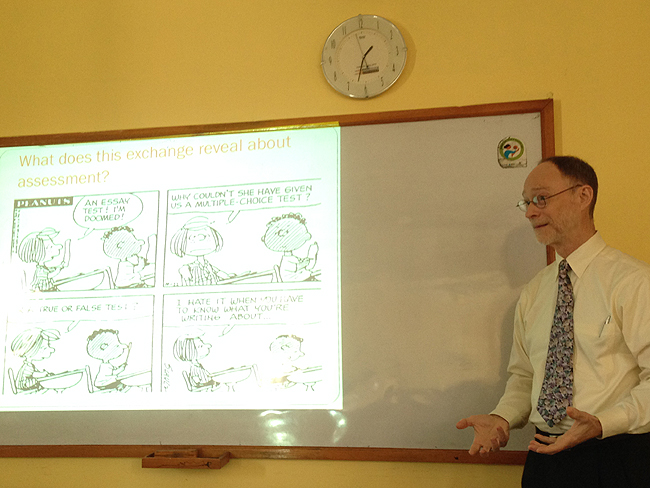 Nepal has been following the decade-long practiced assessments and tests in all levels of education from nursery to university level for different purposes whereas the other countries have updated their testing mechanism to enhance the ability and strength of the learners. But there is no such standard test for Nepal to check the ability of Nepalese students. We came to realize that there is enough space for ELT practitioners and language experts for research in Nepal to design a standard test to check the ability of our students in Nepal vis-à-vis the students of other countries.

The one-day workshop was an eye opening program for the participants where we got to know the recent trends of language testing and assessment. I, on the behalf of all trainees would like to thank NELTA President Mr. Hemanta Raj Dahal and Ms. Sara Denne-Bolton, Regional English Language Officer (RELO) from Embassy of the USA for providing such an opportunity to discover our strengths as teachers of English language and find our students’ potentialities in learning second language comfortably.