What happens when a whole new generation of farmers who have the ability to meet in the village square to discuss whole new types of crops, agricultural methods, and markets for their harvest? They meet at the local Choutari. They find or create new intersections on the way to one another’s fields, villages, and towns–and those intersections can be called new choutaris. The blogzine ‘Nelta Choutari’ (Choutari for short) is just one possibility among many that could emerge as the world becomes more connected, and as our community gives rise to more productive and active new scholars. This Choutari came into existence when a group of ELT scholars found a way (called blogging) to talk to one another, share their ideas with the community, and ultimately turn to the community to join the conversation. After they ran the conversations for four years, they asked a new group of enthusiastic colleagues one year ago, and that group (the current team) has had wonderful opportunities to continue that project by sharing, creating, and updating professional knowledge in our community.

The journey of Choutari in the editorship of the current team for the first year was a wonderful experience. As young and enthusiastic members, we  were so excited to take over the responsibilities of running the blog. At the same time, we took some time to develop confidence in subject matters and technical skills and community engagement.

We are proud to be a team of scholars from diverse background and with diverse expertise (See the introduction compiled by Shyam Sharma in January 2013). We are even more excited because a few new members have joined us at the start of our second year. It has been a tradition of Choutari to invite those who have actively contributed to the professional conversation to start directly contributing their ideas. This year, we are excited to have Umes Shrestha, Uttam Gaulee, Santona Neupane, Laxmi Prasad Ojha, Jeevan Karki, Ashok Raj Khati, and Sagun Shrestha join us. A new colleague, Santona Neupane will also be assisting us in the coming months.

Everyone in the team has their own interesting stories in connection with Choutari. I would like to share how I came to know about this wonderful venue. While I was studying masters’ degree in ELT in Birgunj outside Kathmandu valley, I was more interested to learn about technology and its integration into pedagogy.  To quench the thirst of my learning and passion for engaging myself in collaborative projects, my teacher Sajan Karn, one of the founding members of Choutari introduced me to Choutari.  The more I read and contributed to the blog, the more interests along with passion I grew and finally I delved into this. My connection with Choutari and passion to get involved in ongoing conversation not only qualified me for joining the current editorial team but also enabled me to pick this blog as a case for my Masters’ thesis as a means of professional development in Nepalese ELT, which is the first thesis in Nepal focusing on a professional blog.

Most of the issues in 2013 leaned toward being special issues. After the joint venture of the old and new teams produced the special/anniversary issue in January, we focused on seeking a theory-practice interface in Nepalese ELTin February, ; March was a conference special; April issue advocated for the integration of creative writing in ELT; May issue mainly focused on teacher’s perspectives on scholarly ideas;  June issue stretched from ELT practitioners’ reflection on their achievement to action research; and July issue featured topics on local pedagogies especially in multilingual settings. Likewise, August issue focused on teachers’ narratives; the entries in September added to Choutari’s ongoing conversations about language teaching and learning critically; October issue again specialised on some practical aspects of ELT with creating writing as a focus, November issue explored creativity in young learners and finally we wrapped up the year with a diverse issue addressing multiple entries under diverse theme and thus making the December issue special among specials.

Next, I would like to share some interesting numbers in the tradition of thanking the community by indicating that there is power in numbers! First, here is the big picture of readers’ visit to the blog from the entire five years of Choutari. 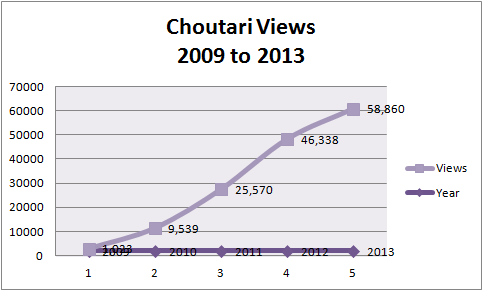 The above statistics clearly shows that the number of readers visiting Choutari is constantly increasing year after year from its inception in 2009. What is most remarkable and pleasant is the fact that number of views has increased more than double in the last two years.

Let me be specific over the statistics of the Chouatri visitors during the new team’s first year responsibility of running the blog. Here is the graph which shows the number of visitors in months over the year 2013. 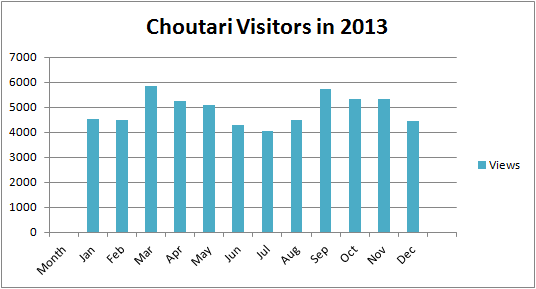 While we had around five thousand visitors every month. We had significantly larger number of visitors in March and September. While March could be explained by the being the conference issue, we couldn’t explain the peak of September. Could it be due to the festive occasion when readers had more time to read?

The blog entry ‘T.S. Eliot’s “The Love Song of J. Alfred Prufrock” contributed by Motikala Subba Dewan is on the top of the list.  Dewan’s piece of writing targeted to the bachelor level students of English in Nepal gives a brief glimpse about T.S. Eliot and his poem “The Love Song of J. Alfred Prufrock”, a prescribed poem in major English BA course. Similarly, Practice Teaching: A Reflection by Ganga Ram Gautam and The Role of Local Culture and Context in English Language Teaching by Mabindra Regmi stand the second and the third respectively in terms of the number of visits. The fourth and the fifth blog entries among the top five most viewed in 2013 include The Process-Genre Approach: Some Ideas for Teaching Writing in Nepal by Madhav Raj Belbase and Teachers as a facilitator by Mukunda Kumar Giri. The highest number of views indicates that the audience are interested in finding such entries in the blog. We find the opportunities for both the contributors and editors to cover the blog posts related to the theme.

The page ‘Join the Conversation’ on Choutari has got the highest number of comments. However, the top five most commented blog entries as of its inception to till 2013 include ‘Future of our nation is in Students’ Quality Circle*, What-like what-like English?, English and Scientific Research: Some Reflections, NNESTs and Professional Legitimacy: Fighting the Good Fight and Teaching Language Functions as a Broader Concept.

The most often visited/read blog entry of 2013 was ERROR ANALYSIS – Third Person Singular Subject-Verb Agreement by Umes Shrestha and the most commented was “NNESTs and Professional Legitimacy: Fighting the Good Fight by Davi Reis. Meanwhile, the Choutari team carried out a quick survey from the top five contributors/commenters of last year and the responses upon the survey has been compiled and interestingly presented in this blog entry in the anniversary issue.

Last but not the least, we acknowledge substantial contributions made by our valued readers, commentators, authors/bloggers and well-wishers for their active engagement and participation in the blog. Like the wonderful support in the past, we urge your active participation so that we can make Choutari as more engaging and more productive place in the days to come. 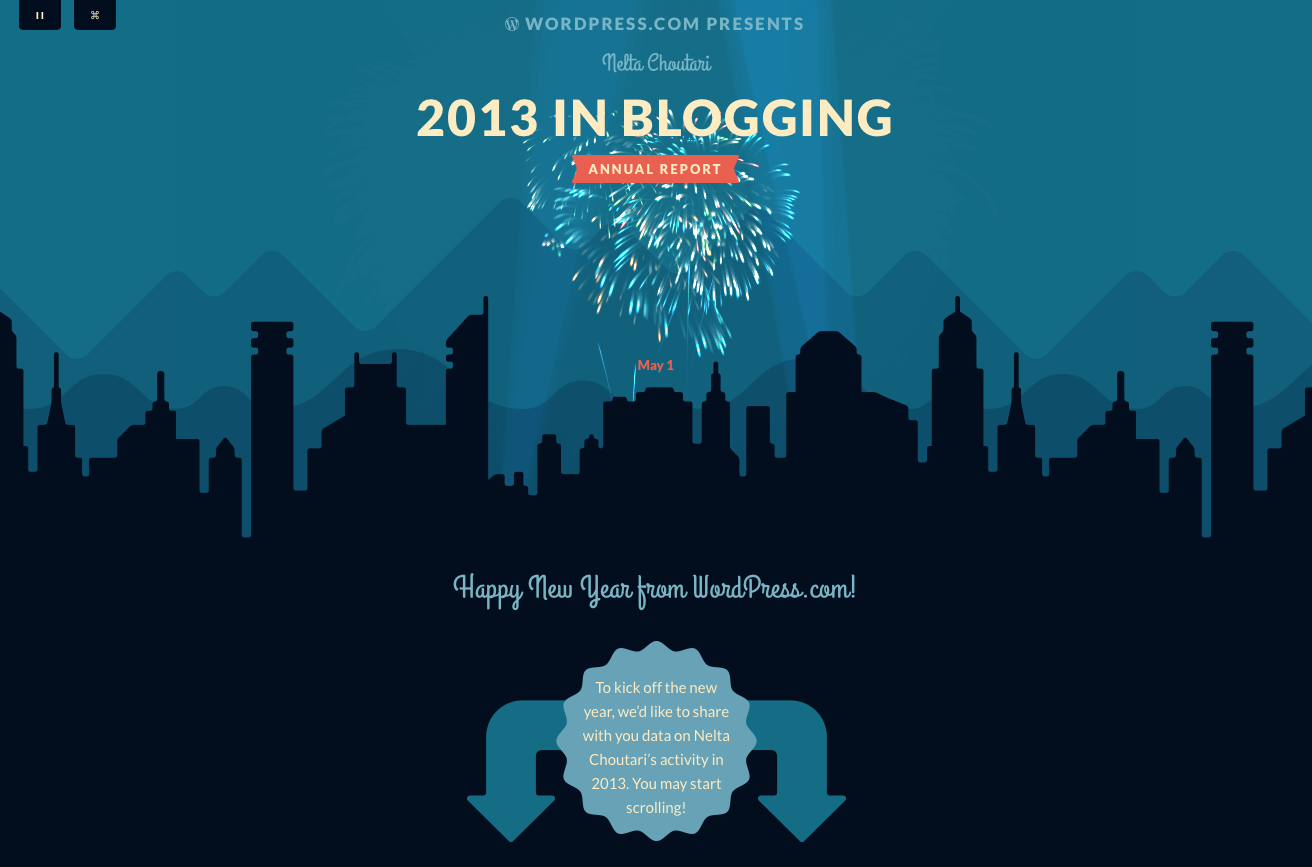 Also, if you can find a few extra moments, here is a visually attractive “annual report” sent by WordPress.com to us.