EFL contexts like Nepal seldom provide students with opportunities for authentic communication in English. Therefore, deliberate ‘interaction in the classrooms’ is emerging as one of the leading conventions to enhance the students’ linguistic resources as well as equipping them with appropriate skills for communication. The major intent of this entry is to share a teacher’s insider experiences of developing interactions in an ESL classroom in Hong Kong while fully recognizing that the contextual differences between Hong Kong and Nepal will necessitate teachers’ own creative adaptation or re-invention of whatever tips shared from elsewhere. We shall, first of all, present the concept of interaction from sociocultural perspectives and discuss various challenges for the front-line EFL teachers to plan and implement lessons that incorporate interactions in ESL or EFL classrooms. Then, insider experiences of the first author of this entry in overcoming those challenges are shared. Assuming that the textbooks and teaching materials play a vital role to promote and facilitate the interactions in classrooms, a sample activity designed for the Secondary Two (Class 8) ESL students in Hong Kong is also included and discussed.

Classroom interaction has been considered one of the most important pedagogical research topics in language classrooms in recent decades, mostly due to the influence of the Russian psychologist Lev Vygotsky. Vygotskian sociocultural theory (Hall & Walsh, 2002) views the act of language learning as a social activity in which children build their knowledge through the help and scaffolding of more knowledgeable peers or teachers. Interactions in language classrooms are important social activities for students through which they not only construct knowledge, but also build confidence and identity as competent language users (Luk & Lin, 2007). In an in-depth ethnographic study of teacher-student interactions in Hong Kong, Luk and Lin (2007) found out that students develop multiple identities through their classroom interactions with their language teachers. Although the study took place in an ESL classroom where native English language teachers are available, Luk and Lin (2007:188) present a telling story about how students negotiate identity and cultural resources, which are “translated into non-institutionally sanctioned language practices and identities”. Perhaps, the social knowledge students bring into the classrooms might be those “non-institutional language practices”, which schools and teachers are supposed to build on in order to enhance their learning.

Interaction in the classroom refers to the conversation between teachers and students, as well as among the students, in which active participation and learning of the students becomes vital. Conversations are part of the sociocultural activities through which students construct knowledge collaboratively. Conversations between and among various parties in the classroom have been referred to as educational talk (Mercer and Dawes, 2008) or “exploratory talk” and “presentational talk” (Barnes, 2008:5). Presentational talk is the one-way lecture conducted by the teachers in the classroom, mostly featured in Nepalese EFL contexts, which contributes little to encouraging and engaging students in a communicative dialogue. Exploratory talk is a purposeful conversation, often deliberately designed by teachers, which provide opportunities to students to engage in “hesitant, broken, and full of deadend” conversations enabling them to “try out new ideas, to hear how they sound, to see what others make of them, to arrange information and ideas into different patterns” (Barnes, 2008:5). Given the limited linguistic resources the EFL students possess in their school years in EFL contexts like Nepal, these hesitant, broken and deadend conversations could be developed into spontaneous conversational skills. When students engage in interactions, they produce “symmetric dialogic context” (Mercer & Dawes, 2008:66) where everyone can participate, get respected and get the decisions made jointly. Students’ participation in interactions, therefore, can help them enrich their linguistic resources and build their confidence to communicate with others in English.

Designing interaction: challenges and ways ahead

When I started teaching English in a Hong Kong school, I noticed that students in Hong Kong like to talk a lot. These talks are often characterized as responses to the multiple stimuli such as various gadgets and social media. To realize the importance of students’ talks in their knowledge building was a paradigm shift in me, as my high school days in Nepal still remind me of the very quiet classrooms where often only the teachers talked. The process of designing lessons with meaningful interactions in my ESL classroom in Hong Kong posed several challenges such as incorporating various forms of interactions, achieving the lesson goals through such interactions, participation of students in meaningful interactions, and making sure that all the students engage in conversations and learn from the teachers as well as from themselves.

Secondly, of course students’ varying language abilities, topics that generated the conversations among them and matched their abilities presented a micro level challenges in managing interactions. Students in my class came from diverse cultural and linguistic backgrounds, and I believed that they brought with them their own unique knowledge base. Their varying English language ability might sound simple to some or unnoticeable to others, but addressing them in the classroom would very much influence how they view themselves and others (Luk & Lin, 2007) and make them feel how their cultural and linguistic knowledge base could be important in furthering their academic journey.

To overcome the underlined challenges, I took a closer look at other teachers’ practices and suggestions by researchers (Jong & Hawley, 1995). I found Jong and Hawley’s (1995) suggestions particularly setting up group roles, teacher monitoring and evaluation, peer evaluation, appropriate group size and configuration quite useful. Assigning group roles and group configurations could be thought during the planning stage. Teacher monitoring should be conducted at the while-teaching stage, and teacher and peer evaluations are elements to be incorporated at the post-teaching stage. I often incorporated three stages of interactions in my lessons.

The idea of teacher monitoring took place during the process of pair or group interactions. Teachers could evaluate the extent and forms of interactions students conducted during the process, and at the same time, provide feedback and support to the weaker students. I often walked around the class and monitored the students’ interactions to make sure that they are up to the tasks and are supported when in need.

Timing the interactions was another important aspect handling the students’ conversations purposefully and meaningfully. I often gave the students 5-10 minutes to interact among themselves and prepare a presentation poster or speech. The timing depended on the topic’s extent of difficulty and students’ ability as well.

Students were often asked to present the outcome of their interaction to the whole class in poster or speech forms. In order to ensure every students’ participation, they were trained and assigned with roles to make contributions individually even during group presentations. This was at this stage that the teacher and peer evaluation took place. I often adopted a range of techniques to evaluate students’ performances such as asking students to fill in an evaluation rubric or asking students about their peers’ performances and grade them on the board. Sometimes this process generated heated debates and quarreling, friendly though; among the students because they thought that some of their peers were not evaluating them fairly.

Last, but not the least, I also created teaching materials and worksheets conducive to the diversity of the students particularly in order to scaffold on their linguistic and cultural resources. Textbooks nowadays are found incorporating activities for some forms of interactions, but they often become irrelevant in the classrooms because these textbooks cannot address the range of students’ ability levels, skill levels and their cultural and linguistic backgrounds. Most textbooks in Hong Kong, for example, incorporate elements of Chinese and Christian festivals and ask the students to interact on that. However, students from Nepal, Pakistan, India, or Sri-Lanka in Hong Kong would not be able to use their cultural resources and construct knowledge from the interactions. Although English language textbooks in Hong Kong are considered to be the most advanced resources for ESL students, modifications often needed to suit to my students’ needs. These changes sometimes also needed to address the students’ willingness and skills to spontaneously engage in interactions. For example, some students in my class were very poor in English and found it hard to even properly construct questions to ask their friends, while others were at a native English speaker’ level.

Taking these questions into consideration, we present an activity (Activity 1) that can potentially be used to promote pair interactions in an EFL classroom. This activity is a modified activity from a secondary two (Class 8) English language textbook in Hong Kong, which is believed to suit students with moderate English ability. The moderate language ability in this context is the students’ ability to use connectives and quantifiers in authentic situations. This activity incorporates multicultural elements in the context of Nepal as it contains pictures of various Nepali festivals as well as Western festivals such as Christmas. Students can ask their peers about their likes or dislikes and jot down their answers to present to the class. Phrases given in the boxes are meant to cater for learner diversity. For higher proficiency students, this activity can be presented in a different way to suit their levels.

1. Study the pictures in the boxes in pairs. Ask questions to your friend about items that he/she prefers or doesn’t prefer more (or less) and why. Write your friend’s responses in the checklist at the bottom. 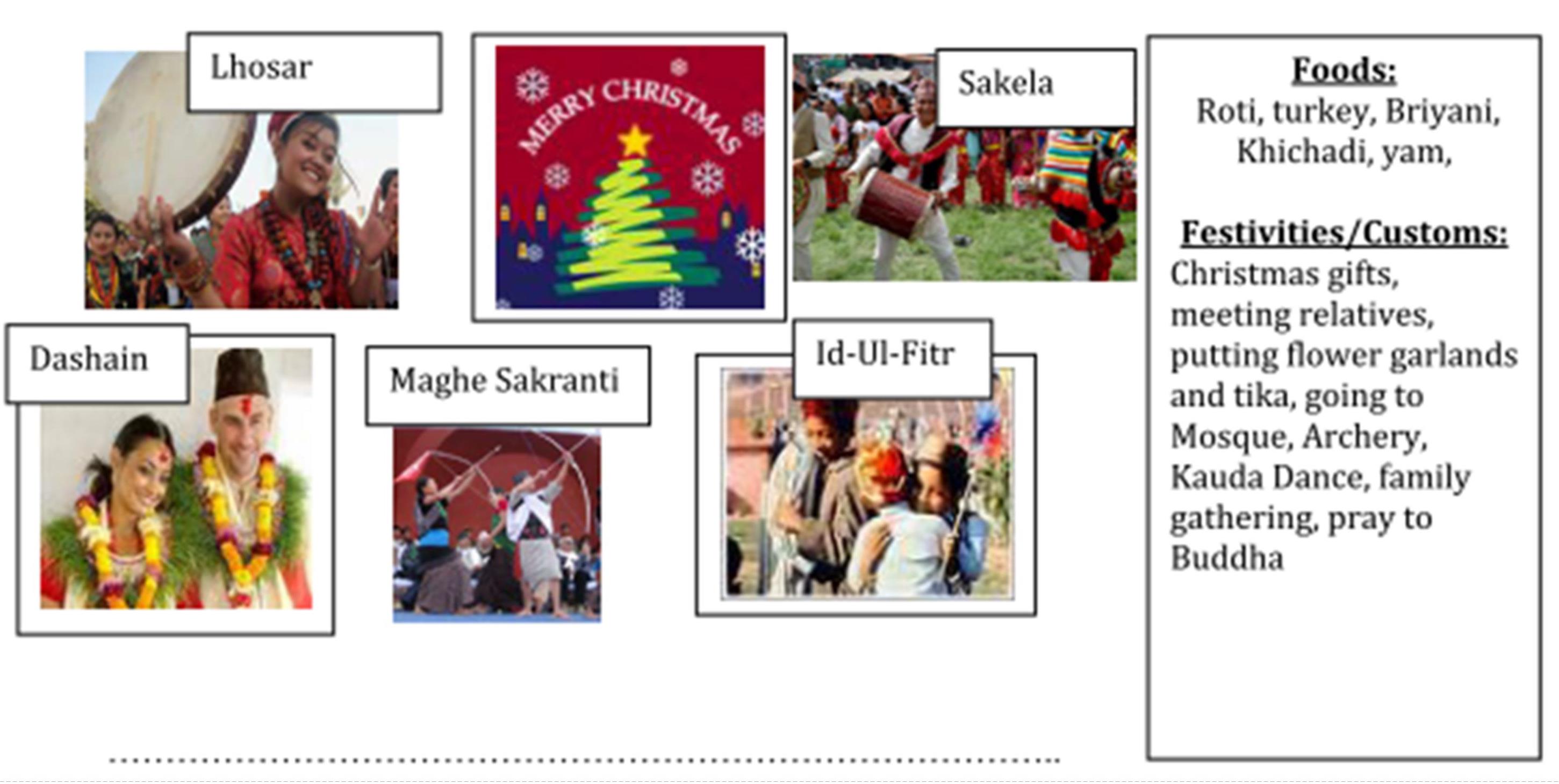 2. Write your friend’s answers below. You may need to present it to the class.

This entry presented the concept of interaction from a sociocultural perspective sharing the first author’s teaching experiences in a Hong Kong school. The sharing included the challenges as well as possible strategies a teacher might adopt to devise, implement and evaluate interactions in an EFL classroom. The sharing could present a model for EFL teachers to choose from many other pedagogical options in order to enhance the students’ English language learning. The activity presented in this entry is only one example of hundreds of such possible activities. The original activity might not be suitable to adopt exactly in Nepalese EFL classes, as there are diversities in terms of language, culture, students’ abilities as well as available resources based on geography, developmental level and proximity to urban life. Teachers need to bear in mind that they understand their students the best and they need to know how students can best interact and learn the language in the classroom.

1- Mr. Chura Bahadur Thapa is a PhD Student in the Faculty of Education at The University of Hong Kong. He was an English language teacher in a local college in Hong Kong for almost 7 years before joining HKU as a postgraduate student. He is currently researching the language learning and motivation of ethnic minority students in Hong Kong. His other research interests include- education of ethnic minorities, linguistic and cultural identity, intercultural communication and citizenship education. He can be reached at chura@hku.hk

2- Dr. Angel Lin received her Ph.D. from the University of Toronto, Canada. She is an Associate Professor of English Language Education at the University of Hong Kong.  Well-respected for her versatile interdisciplinary scholarship in language and identity studies, bilingual education and youth cultural studies. she has published six research books and over eighty research articles. She can be reached at angellin@hku.hk.