I teach English language to Bachelor level students. And it’s quite challenging to teach them because they come from the public schools of rural areas with negligible English proficiency. English teaching- learning experience is not only challenging for teachers but also sort of daunting task for many students’ for some reasons. Firstly, the students don’t have enough exposure to English language during their school life. Secondly, the prescribed textbooks for undergraduate students is way higher than their levels. Last but not least, there isn’t not appropriate place and environment for them to practice English. To overcome this challenge, I employ some techniques and strategies. Here I’m going to discuss few techniques that I use with my students.

When we enter into anything unknown, fear grips us and we may suffer from nervousness. Because English in my context is considered a ‘haau-guji’ (bugaboo) to my students. Therefore, my first role is to create a safe, comfortable, and friendly environment. For that I do various things in the class before starting my lessons. As we know, a teacher has many roles to play – sometimes I’m their friend; sometimes I am their facilitator; sometimes a companion to their academic journey; sometimes an instructor; sometimes a guide; sometimes a supporter, and other times a nurturer or a gardener. Let me illustrate below some of the activities I carried out.

Now let me discuss an activity that I do in class as a warm up or an ice break.

Once I was going to teach a lesson called ‘The Joys of Motherhood’, one of the lessons in compulsory English course in the first year of Bachelor level. On that day, I put on a different get-up.  Instead of wearing my usual checkered coat, I donned a black hoodie. When I entered the class, all of my students were staring at me surprisingly. Needless to say, my hoodie had succeeded in grabbing their attention. For a minute or so, I walked silently up and down the aisles holding my jacket. Then I came to the front and smiled at them maintaining eye contact. After that, I asked a question, “Do you know what it’s called?” Surprisingly, majority of my students’ couldn’t respond the right answer. It’s perhaps they were not getting the right word to say or because of their poor schooling background. Then I told them that it was a hood and wrote it on the whiteboard. Then I further told them that jacket with a hood is called a hoody and I wrote on the whiteboard again and they copied. I could see their faces beaming with new vocabulary. First of all, they learnt a new word ‘hood’ in an interesting way. After they learnt, I added one more new word ‘hoody’ to their mind which they received well.

After that I told them that ‘hood’ is not only a noun like the head cover of the jacket, it could also be a suffix to turn a word noun. Therefore, I wrote a word ‘mother’ on the whiteboard and I told them that ‘mother’ was a noun, whom they could see and touch. Then I added ‘hood’ with the ‘mother’ which became ‘motherhood’.

Here, I told them. “Look! now ‘mother’ became ‘motherhood’.” It’s still a noun but not like the previous one. You can’t see or touch ‘motherhood’. You can only imagine or think of it. Just to make sure they understood the meaning of the newly formed word I also translated it into Nepali (Maatrittwa). Those who were doubtful about the meaning of the newly formed term before were clear now and looked satisfied. Then I showed them, how they could form abstract noun adding ‘hood’ as a suffix. For instance, fatherhood, parenthood, womanhood, manhood, childhood, neighbourhood, brotherhood, sisterhood, girlhood, boyhood, and likelihood. After this was done, I encouraged them to search more words in their dictionaries or mobile phones that end with hood. This made the environment ripe i.e. ready for teaching and learning. Now I could begin the lesson with more elicitation from students. I could continue the lesson by engaging their attention and involving them.

Now I would like to share with you another techniques that I use to teach English language.

Use of pictures to tell stories

When the beginner or intermediate students’ can speak chunks of a sentence or a paragraph without looking at the written script, it’s a good achievement for them. They need support on how and where they could chunk. For this, I chose a video of a native speaker titled ‘’ Emmma Fierberg’s Account’’ and transcribed a paragraph. Then, I chunked the paragraph and sentences so that my students and I could do the reading without looking at the text. After this was completed, I gave them a task where they could chunk paragraphs and sentences to enhance their speaking skills. Here is the transcript of the video.

I wanted to test out for myself how waking up at 4:30 affected my productivity. I woke up at 4:30 a.m. for one week, like a Navy SEAL. I’ve read a lot about how Navy SEALs like Jocko Willink wake up at 4:30 in the morning. Jocko famously says that discipline equals freedom. It is Friday, two days before I start this experiment. Normally, my alarm goes off five minutes before 8:00 a.m. Setting my alarm a full three and a half hours earlier is gonna be really scary. Will I survive? (Source Link: https://youtu.be/5Kp–rm7N2M)

To tell the above story, I made 14 cards out of two A-4 size papers. Then, I drew pictures so that I could tell the story looking at them and even without looking script on it after some practice. Furthermore, after practicing telling the story at the pictures repeatedly, I wouldn’t even need cards to tell the story. The pictures don’t need to have perfection. Rather, they would be just a means to achieve the goal. Therefore, I didn’t waste much time to draw them. And hence, the drawings don’t look funny to you. Here are the fourteen images drawn on the cards along with the script below them. 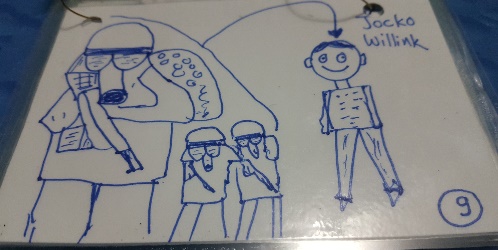 After showing the above examples, I divided the students into group and assigned them different texts to try to represent the texts through pictures so that they would be confident to try any other texts themselves.

I divided a text in the following way to give them to practice. Here are some samples.

There was nothing to do but fall on the bed and cry. So Della did it. (Source: The Gift of Magi by O.Henry)

While the lady of the home is slowly growing quieter, we can look at the home. Furnished rooms at a cost of $8 a week. There is little more to say about it.

In the hall below was a letter-box too small to hold a letter. There was an electric bell, but it could not make a sound. Also there was a name beside the door: “Mr. James Dillingham Young.” (Source: The Gift of Magi by O.Henry)

In the same way, I divided the story into eight other parts in the same way and assigned them to read the text and represent that through the pictures.

In a nutshell, I experience myself that the better images we produce the interesting our learning outcomes becomes. We can encourage our students’ to produce better thematic pictures/images then we can ask them to write a short story looking at the images. In doing so, the students’ get benefitted in two ways. The first thing is that they improve their drawing skills and also they develop story writing proficiency.

The author is a freelance writer and a life member of Nepal English Language Teachers’ Association (NELTA).