He is tall. Very tall compared to my height. He looks into the world through a pair of slightly shaded glasses. Those glasses probably let him filter all the negativity around him and help him see a vision – a vision of a teacher, a writer and a mentor. He speaks gently and seldom smiles. He stands in the middle of the class and with his words; paints an exciting picture of characters, themes and conflicts; and walks us through the colorful fields full of metaphors, similes and hyperboles.

He is one of those rare teachers who writes a lot. His blog is a testimony of his prolific writing habit. Even his facebook statuses, usually very short poems, reflect his creativity. Then, it makes me wonder. May be creativity is a verb, not a noun. One has to constantly work at it. It’s just my perception. His creativity could be as natural as breathing.

I had met him back in 2012. He taught me Fiction in my M.Ed. ELT first semester and since then I have had a renewed interest in reading, interpreting and analyzing literature. I started becoming passionate but critical of the texts I came across. In addition to that, he has inspired me to write down my own fictional works.

Naturally, I was pretty excited about the workshop. I had always wanted to be in his classes one more time and the workshop was it. Even though the focus of the workshop was “Academic Writing”, I knew he would have his own twist on it, with a few pinch of strange concepts sprinkled around here and there.

So he started the workshop by asserting that writing is not an isolated activity, but it is an activity integrated with reading, listening and speaking. “The key word is perform. Writing is a performance, it is an action of hands as well as an action of minds,” he added. And most importantly, he continued, “Performance doesn’t mean a writer’s activity alone… it is about a reader’s action also”. This made so much sense that it immediately struck a chord with me. A writer has to let readers perform too. Otherwise, what’s the point in writing at the first place? An effective writer thus leaves enough clues here and there in the text for the readers to come up with their own knowledge. 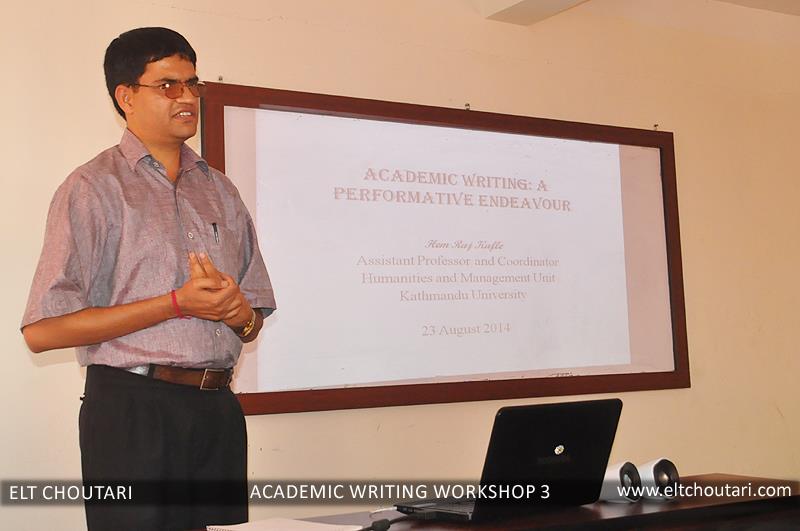 Writing is a performance because the writer has to make sure that his/her ‘authorial presence’ and credibility are visible in every word and every sentence of the text. Moreover, a writer has to make sure there are implicit and explicit moments of communication with the reader. He/she has to constantly facilitate the reader towards understanding and creating new perceptions. Similarly, a writer has to represent his/her community and contribute towards adding new knowledge and scholarship. Therefore, writing is not merely scribbling texts on a sheet of paper, it is a performance that involves both the writer and the reader.

Next, he talked about some of the common attributes every writer exhibit in some ways. For instance, the ‘writer’s block’ which he also labeled as the ‘blinking cursor syndrome’ for those who keep staring at the computer screen searching for words to start with. Similarly, every writer has the irresistible urge to tell the background or the whole story. Next, most of the writers can’t decide on the choice of diction – whether to use big or small stock of words, or on the choice of sentence – short sentences or longer sentences.

And to come to the main focus of the workshop, he talked about the process of creating an argument in academic writing and substantiating one’s stance. He gave an instance of Stephen Toulmin’s elements of a proper argument: claim, ground, warrant, backing, rebuttal, qualifier and final claim. A good paragraph is a combination of all or some of the above elements. The concept of ‘rebuttal’ is quite interesting. Apparently, acknowledging opposing views and giving them a small space in one’s argument adds more strength to one’s argument.

At the end, he gave us eleven tips on how to improve one’s writing. I am reflecting on these points from my perspective.

After attending this workshop, I now feel the urge to go back to all my writings and scrutinize them strand by strand – to find my ‘authorial presence’ in them. I had never thought about this aspect of writing – that the author has to be present in the text. Similarly, I am going to try speak-record-transcribe method whenever I feel stuck in the rot. I will also make sure none of my paragraphs start with a citation but with my own sentence. In addition, I will use these techniques in presentations and in writing scripts for speaking as well.

Writing has always been an elusive grape for me. I feel like I am always getting ‘there’ but never near enough. I always go back to my texts, interact with them and revise them. That singer from Rolling Stones is probably right. I can’t get no satisfaction out of my writing. But just like Hem sir once said during his class, “A text is always in the making”. May be it’s not about getting ‘there’ and being satisfied after all. It is a process… a continuum… a journey. And our job as a writer is just to enjoy the ride.