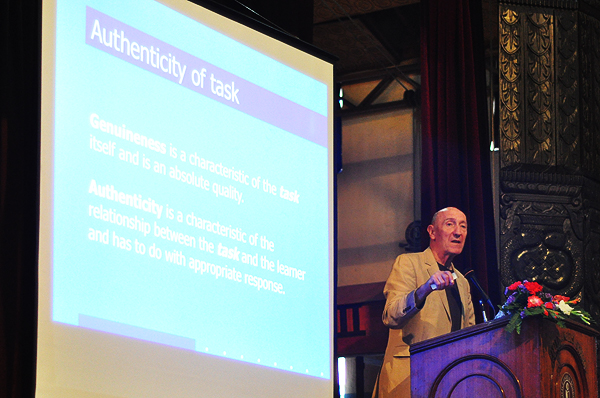 “What does ‘authentic’ assessment mean? How do we do it?” A Critique on 19th NELTA Conference Plenary by Professor Keith Morrow, UK

Dr. Keith Morrow started the plenary session at Hetauda on 3rd March, 2014 with this excerpt from an English textbook used in England over four decades ago. It is interesting to note that the textbook writers and language policy makers bordered absurdity in the name of imparting the right content to the students. Dr. Morrow shared the same line of thought and discussed with the audience regarding how the text in English textbooks have steadily gravitated towards authenticity. And how all this has resulted in a testing system that is more authentic in nature.

But what is authenticity? Dr. Morrow was of the notion that a text that mirrored the context of a society as exactly as possible could be considered more authentic. This resulted in an inextricable correlation between the text and the context of the learner while defining authenticity. Probably that was the reason why the speaker delivered the whole session on authenticity along the thread of context of the learner. He exemplified his belief by giving an example of how an authentic piece of language text like his personal tax return paper, might prove to be far from authentic in a different context, say Nepal. This spatial, and most likely temporal, property of language discourse necessitated context of the learner to be addressed while designing both textbooks and assessments for language learners.

Dr. Morrow thus added the aspect of context while designing a test in addition to the two important traditional criteria: validity and reliability. He was of the opinion that there was a very direct and strong link between validity of a test and the context. However, the relationship between reliability of a test and the context could be rocky at the best. By making the test authentic in accordance to the context of the learner, the validity is confirmed as the test measures exactly what it intends to measure. But if you consider the reliability of the test, the same learner taking the same test at two different times might not result in the same performance level. Now this creates a dilemma – should we contextualise the testing material so it is more valid to the learner, or should we refrain from doing so, and confirm to the reliability criterion that is so essential in testing?

Although the session did not offer a viable solution for the ensuing dilemma, it did focus on the necessity of the testing material to be more authentic in nature. Authenticity in testing not only brings the learner closer to the language, but also creates a more meaningful learning. However, since it is the learner who is indulged in the language pedagogy, it is imperative to integrate the context of the learner to make the testing more authentic.